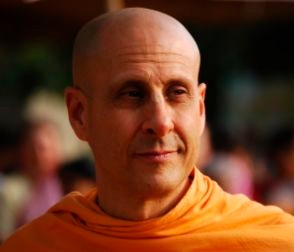 When Srila Prabhupada came to Russia in 1971, he predicted, that this country would only last for twenty years, and in 1991 Soviet Union was dissolved. From 1989 the new page of the development of Krisna consciousness in Russia started with a lot of enthusiasm, people in Russia were thirsty for something spiritual, millions of books were distributed.

In 1998 a big crisis in Russian ISKCON took place, when Harikesa Maharaj resigned from the position of a guru. The whole Russian ISKCON was divided in two parts. At that time a lot of leaders decided not to come to Russia, but Radhanath Swami Maharaj came. He revived Bhakti Vijnana Goswami Maharaj. And told him about situation he came through in New Vrindavan, when he was threatened by some followers of Kirtanananda Maharaj, which deviated. Radhanath Swami Maharaj could not take shelter in ISKCON, so he was hiding in the temple of Gaudia Math in London. This story showed to Bhakti Vijnana Goswami Maharaj that there must be some profound reason behind it. So Radhanath Swami Maharaj did not only revive him and rebuild his faith, but also taught him how to extract lessons from everything which is happening.

Radhanath Swami Maharaj is a very deep person, he does not have superficial impressions. Usually all the crises happen in our life because our perception is superficial. He is also very uncompromising because he has a complete faith in spiritual principles. Moreover he went through such unimaginable difficulties and still he is so happy and enthusiastic, he is giving shelter to so many people.