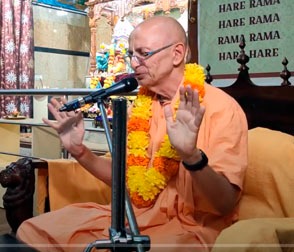 Srila Prabhupada arrived in Russia in 1971. The country was behind the iron curtain, it means that practically nobody would be able to leave the country and go to the West and very few people were allowed to come into the country. But Soviet people were humble and spiritually thirsty. You may think that you are an atheist, but deep inside you are a believer, this is the nature of the soul. People feel emptiness in the heart if there is absolutely no religion.

Prabhupada met professor Kotovsky, but this visit was not successful from a material point of view. Then Syamasundara Prabhu met a young man Anatoliy, who later became Ananta Shanti, and brought him to Srila Prabhupada. After that Ananta Shanti started preaching. In 1977 Gopal Krisna Maharaj came to Moscow for the international book fair, he brought BBT books. People were spiritually thirsty so they wanted to know about God, Krisna consciousness was spreading like fire. KGB tried to stop it, they imprisoned around sixty devotees, and some devotees were placed in psychiatric hospitals where they got heavy psychotropic drugs. Kirtiraj Prabhu and Harikesh Maharaj started a very strong campaign all over the world – Free Soviet Hare Krisnas. No one wanted to give up Hare Krisna and everyone would still preach despite all these dangers. The more pressure was there from the government, the more devotees would preach.

In the beginning of the ninetieth there was a huge Hare Krisna explosion, a lot of new devotees came, book distribution was very easy. There was a special radio station called Krisnaloka, it was very popular in Moscow. Then in 1998 there was a crisis in Moscow, half of the devotees left. When a spiritual organization becomes popular or big, then there are a lot of blind followers, they are a big burden for organization and for Krisna too.

Years past, the movement spread even more and became stronger. Russian people are joining ISKCON all over the world.