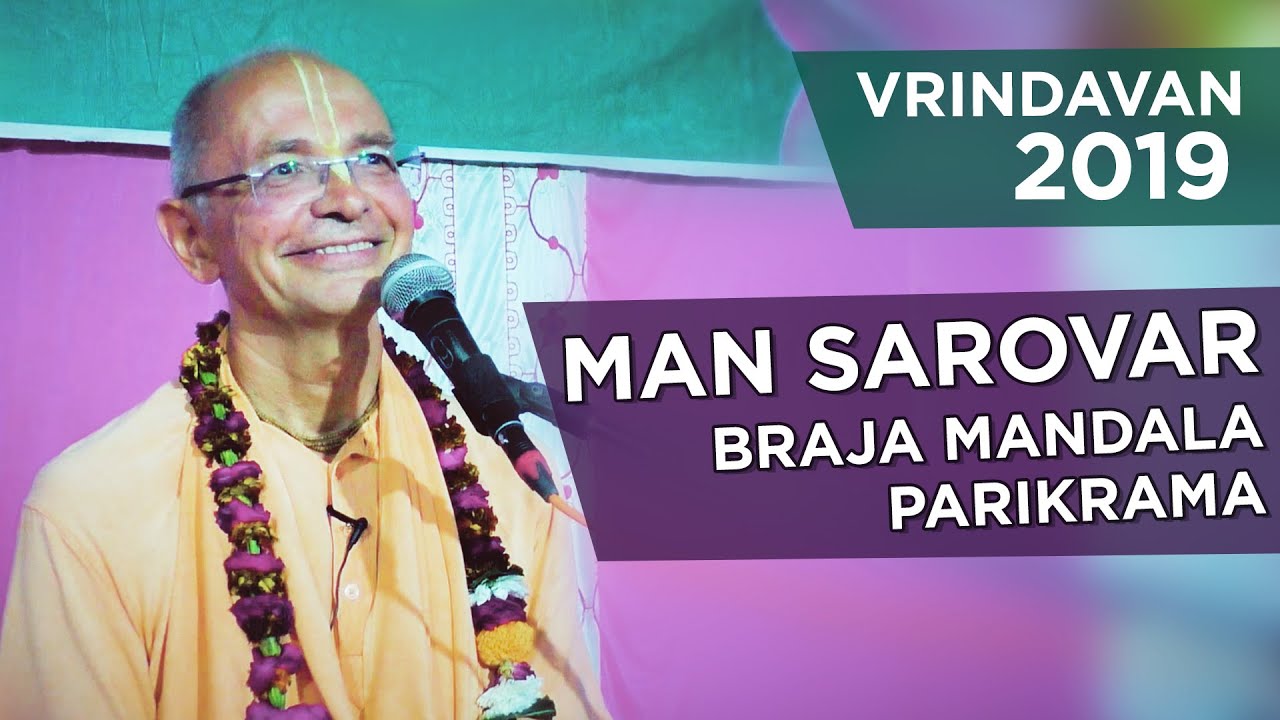 The word "man" in Sanscrit can mean pride, anger, but it is usually translated as jealous anger. Usually people think when somebody becomes a devotee, especially when he becomes a sadhu, what to speak about the highest possible rank of a devotee, that he is free from anger, free from jealousy, free from pride. But here in Vraj we glorify the amazing quality of Srimati Radharani which is manifested here, which is Her anger, pride and jealousy. This subject matter is very difficult to understand.
Man Sarovar, this amazing lake is a mixture of tears of anger of Srimati Radharani and tears of repentance of Krishna. From the first glance it seems like this is a very mundane lila. Srila Sukadeva Gosvami while explaining this lila uses what is called paroksa vada or indirect manner. "Srimad-Bhagavatam" is not conveying the direct meaning, especially when it comes to the intimate relationship between the gopis and Krisna, and Srimati Radharani and Krisna. Because the very meaning of "Srimad-Bhagavatam" is rasa, it can not be conveyed by the direct meaning.
The rasikas say that if you speak about rasa in direct meaning, you destroy it. Sometimes people don’t understand why "Srimad-Bhagavatam" is written the way it is written, but Sukadeva Gosvami is not a storyteller who wants to entertain his audience. On the one hand he wants to reveal this secret - who is the dearest one to Krishna, and on the other hand he doesn't want to do it. So he decided not to speak about it himself, but make other gopis to speak about it, and they will do it indirectly. When the gopis saw the magnitude of Srimati Radharani’s love, after Krisna left them and then He left Her during the rasa dance, they were very happy.
Krishna left Srimati Radharani because He did not want Her to be blamed by gopis, He would rather prefer that He would be blamed. Krishna wants to protect the purity and chastity of Srimati Radharani. Moreover He thought that when all the gopis will see the suffering of Srimati Radharani in separation with Krishna, they will understand that their suffering is nothing in comparison with Her suffering, and they will appreciate Her love of Krisna. Your own bhakti can not grow unless you respect the devotion of other people, especially if their devotion is greater than yours.
When we read about this wonderful lilas we have to try to understand the deeper meaning of all these lilas. Fortunately for us the previous acaryas, who were following the footsteps of Sri Caitanya Mahaprabhu, revealed all these secrets. But still we need to become very sensitive and pure in our heart to believe in their meaning.